Home > Blog > History of the Bathroom: A Look at How the Modern Bathroom Came to Be

History of the Bathroom: A Look at How the Modern Bathroom Came to Be 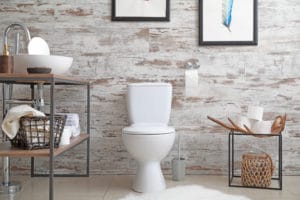 Even if we go back a little more than one hundred years in this country, you might be surprised to know that the bathroom was not yet a room all of its own. There are famous depictions of New York apartment buildings and tenements in the early 20th century where the bathtub would be located right next to the stove right smack in the middle of the kitchen. In fact, there are a few NYC buildings with this particular set up and have now come back in vogue by some very few but dedicated interior designers. Needless to say, the bathroom has come a long way. Today’s modern bathroom has many recognizable features but is also reaching a new level of convenience and style all of its own. Let’s take a look at some of the history behind this fascinating room of our house.

A Tradition of Bathing and its Social Importance

Being clean is important. We all know this. Our bathroom is where many cleaning and grooming activities take place. This has been going on for hundreds of years, as we might remember from our Roman history. The ritual of bathing was very important to the ancient Romans. To the Romans bathing was a whole ritual that included socializing, engaging with your neighbors and peers, and the opportunity to cleanse oneself and take care of the body. You might even think of this as the modern country clubs, where people gather to form a community. As skilled civil engineers, this society was apt at building bathhouses that fulfilled this purpose for their society.

When it came to toilets, ancient civilizations would use a chamber pot and often a public toilet system.

England in the 16th Century

Public bathing was falling out of favor some, as people found it difficult to find clean water during this time. This seemed to turn this public tradition into something that was done in the home, indoors, and a little more privately. This took some time, however, as our modern concept of bathroom privacy is relatively new. It was around the 16th century, however, that the flushing toilet was first introduced in England.

In the late 1700s, Alexander Cummings advanced the invention of the flushing toilet. A one Thomas Crapper developed a patent for a flush toilet. So as the toilet advanced, these forced cities in England and America to look for improvements in carrying out the water and pumping in a new one. This meant a good long look at the sewer systems and making improvements on this.

And then came the toilet paper. This little invention is not often talked about but really had a great impact on the entirety of the bathroom. Once there was a flushing toilet and sewer system, the need for toilet paper arose. You might be surprised to learn that for many years, people were quite embarrassed to be seen toilet paper and it was only thanks to a targeted ad campaign that the sales of the invention skyrocketed and lost this type of awkward point.

In the late 19th century, hot water came into play. Our understanding and discovery of germs made these discoveries ever more important. Eventually, the middle class began to experience the joys of bathing, showering, and (for some) even using the toilet inside the home. As mentioned earlier, the tenements in early New York City are indicative of the early setups of bathrooms, as the bathtub was often placed in the kitchen.

“Don’t throw the baby out with the bathwater.”

This common expression has origins around this time, when households would often share one bathtub of water. The father would bathe first, then the mother, then the children, and the baby (presumably) would be last. The expression refers to the murky water that the baby would be bathed in, making it easy to lose sight of him!

After World War II, all kinds of commodities and appliances were added to the home. This was no exception in the bathroom. People would begin to develop blow dryers, stand in showers, and more. Trends came and went: stand in showers, vintage tubs, jacuzzis, walk-in showers, glass showers, curtains, etc.

Contemporary Bathrooms — A Place of Comfort and Functionality

In the year 2020, there has been much change. Our bathrooms today are often lavish and very functional spaces where the important hygiene-oriented activities take place. In fact, from about the middle of the 20th century to the present, the bathroom is a place of luxury and privacy. Today, technology is ever more integrated in every room of our house including the bathroom. You might run into sensors that turn on lights, automatic heaters, automatic showers, steam-free mirrors, and even flat-screen televisions! Similarly, today’s toilets are much more water-efficient than the old one gallon per flush toilets, which would send your water bill through the roof.

Find or Build the Right Bathroom for You!

In today’s real estate markets, bathroom remodels are a hot topic. So if you’re ready to remodel your bathroom, then visit C&L Plumbing Supply, today!

« How Bad Plumbing Can Affect Your Health
The Bathrooms of the Future: What to Expect »