A Look at the History of Women in Construction and Plumbing 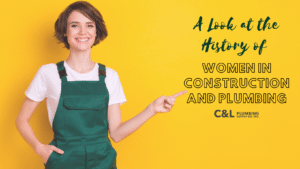 People often view labor-based work, construction, and plumbing, as male-dominated fields. While men are commonly seen in plumbing and contracted work, the role of women has helped shape the industry. Plumbing and contracted work came into the picture for women thanks to the boom of labor in the 1940s when World War II required the service of men all across the United States. From that point on, women have been making more and more appearances within the plumbing industry! It’s safe to say that women help make the plumbing world go round! We take a closer look at the history of women in the plumbing and how the field became what it is today!

Women and the Workforce

Women were working and taking physical roles even before WWII. Women started to make an appearance in labor work, specifically in plumbing jobs, around 1858, when many people needed professional plumbing services. Across the States, hot weather and untreated wastewater arose, which made the perfect environments for infection and disease to thrive. Thus, many people contracted fatal illnesses. During this time, more and more plumbers were called to work to treat water and to clean up conditions. Women were needed to help think of innovative ways to produce clean water and to filter dirty water. Soon enough, we would start seeing many women coming into the world of plumbing to provide immediate services.

Lillian Ann Baumbach is one of the many women that paved the way for a more diverse workplace in plumbing. Her contributions revolutionized indoor plumbing systems, undoubtedly. In fact, she was the first female plumber in the United States in 1950. She was able to land this job through her family as they owned a plumbing company. Although she was responsible for many basic tasks such as unclogging drains and installing new pipes, her efforts were worth being noted. She was featured in an interview with Walter Kronkite, a famous broadcast journalist. It is said that she is also the first woman to ever receive a master’s license in plumbing.

It wouldn’t be long until M. Cary and Daughters Plumbing, a Georgia-based, female-ran company, would come into the picture. Although the company was founded by Mitchel Cary, his two daughters, Melissa and Michelle Cary would join their father early in their youth and would learn some relevant skills to the field as years went by. In 1988, ten years after the company was established, Melissa would go on to pursue her Master Plumbing license, making her one of the few and youngest female plumbers in the south. She recruited her sister as an apprentice and they worked together for many years in their own female-operated plumbing company.

The Ladies Auxiliary Committee for the National Association of Plumbers

The Ladies Auxiliary Committee for the National Association of Plumbers was founded and established at the turn of the 20th century. Originally, it was a place for women to socialize as their husbands went off to work, but it quickly evolved into a women’s activism group. Many of the committee members held women’s rights protests, including women’s suffrage. They had firm standings on environmental issues, workers’ rights, and many other concerns of the sort. Thanks to their efforts, more sanitation policies were pushed for public restrooms. Without their efforts, the state of public bathrooms probably wouldn’t uphold such policies as they do today.

March 11th has officially been marked as World Plumbing Day. The day was first initiated by the World Plumbing Council in 2010. The day is meant to honor the plumbing industry workforce and its role in maintaining healthy water supplies to, in turn, maintain safe communities. This day takes place during Women’s History Month as well, so it only makes sense to celebrate both and to look back on the contributions that women have created in the field of plumbing. This day is the perfect day for women in organizations to share resources for women in the plumbing and to continue supporting each other’s work.

Learn More About the Team at C & L Plumbing Supply!

C & L Plumbing Supply is a women-owned business and we couldn’t be any more proud! You can rely on our knowledge and supply to get you what you need for your plumbing needs. Contact us today to learn more!

« Everything You Need to Know Before Remodeling Your Bathroom
Water Heater Busted? A Quick Buying Guide for This Necessary Appliance  »